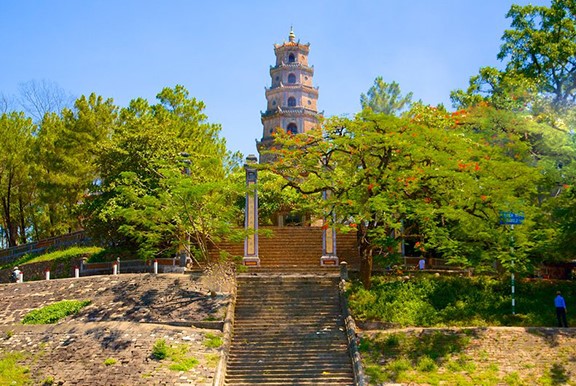 Thien Mu Pagoda – Hue city is converged by many famous landscapes, ancient pagoda in Vietnam. However, the most ancient pagoda is Thien Mu pagoda. According to legend, Nguyen Hoang protected Thuan Hoa, he prepared for promoting his fortune of Nguyen. When you walked along Huong River, he saw small hill with the shape as a dragon. Its name of this hill is Ha Khe Hill.

According to local people, every night, there has one elder with red clothes appearing on the hill, she said to everyone “One people will establish pagoda to converge necessary factors to strengthen the country”. Therefore, this place is considered as Thien Mu Mountain. The thought of Nguyen Hoang Lord touched aspiration of the public. He built one pagoda on the hill looking Huong River; it was named “Thien Mu Pagoda”

Here, it existed one pagoda of the Cham – the relic of “O chau can luc” of Duong Van An in 1553. Until to 1601, Nguyen Hoang officially decided to built this pagoda

According to the development and prosperity of Buddhism, pagoda was rebuilt with large scale under the reign of Nguyen Phuc Chu Lord (1691-1725). In 1710, a big bell was carved a poem in this. In 1714, the lord renewed the pagoda with a dozens of architecture such as: Thien Vuong court, Dai Hung court, Thuyet Phap court, Tang Kinh, Tang, Thien… Many structures do not exist so far.

With the large scale and natural beauty, Thien Mu pagoda became one of the most beautiful pagodas in Cochin. Over historical event, Thien Mu was a place for worshiping of Tay Son dynasty. In 1844, on the occasion of Thuan Thien Cao- wife of Gia Long, Thieu Tri renewed the pagoda such as: Tu Nhan tower, Huong Nguyen communal village and two stone steles to record poems of the king.

Phuoc Duyen tower is famous symbol associated with Thien Mu pagoda. It has a height of 21 meters including 7 stories, which was built in front of the pagoda. Each floor also worship Buddha statue. Inside has spiraled stair lead to final floor in which worshiped gold Buddha statue.

Located on the bank of Huong River, Thien Mu ancient pagoda contributed the beautiful nature here. The melody of bell in pagoda makes impression in each people come to Hue.