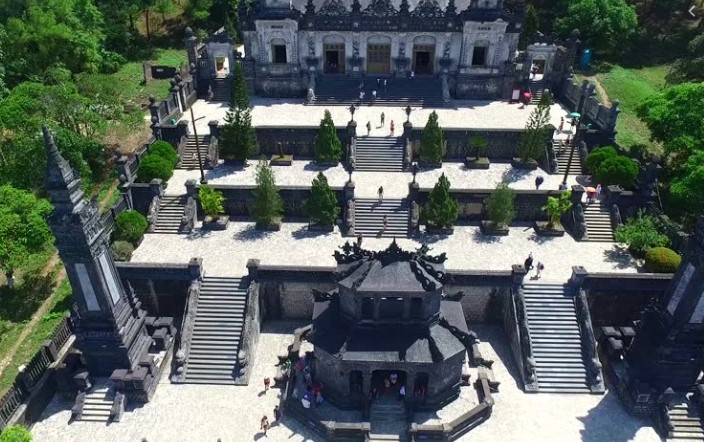 Khai Dinh tomb belongs to Thuy Bang, Huong Thuy, Thua Thien-Hue and it is far about 10 kilometers from Hue city. Khai Dinh tomb has an area smaller than others one but it is more sparkling and sophisticated between western and oriental architecture.

Khai Dinh King chose Chau Ngu Mountain to built tomb which is far about 10 kilometers from Hue. The tomb was established on September 4th 1920 and lasted to 11 years after. The tomb has a combination between modern and traditional architecture. In comparison with those of the preceding emperors, Khai Dinh’ s tomb is much smaller in surface (117m x 48.5m) but it is very elaborate.

Overall tomb is rectangle block with 127 steps stair and divided into:

Coming to tomb must past the system of 37 steps stair, adding more 29 steps stair, tourists will come to a yard, in the middle has stone stele house. All statues were made from stone in Khai Dinh tomb, two pillars are very hight. Go up three more levels so as to reach the altar monument. The walls are decorated and inlaid with elaborate glass and porcelain designs. Beyond these modern building materials and designs, the tombs had elements of eastern art mixed with western designs. The most noticeable characteristic of the tomb is the glassy; it is really a masterpiece of Vietnamese early in the 20th century.

Khai Dinh tomb is really a valuable structure and architecture. It makes diversity for complex of tombs in Hue.

Emperor Khai Dinh came to the throne in 1916 and he chose the slope of Chau Chu mountain (also called Chau E), 10 km from Hue, as the location to build his tomb. The construction of the tomb was started on September 4th 1920 and lasted for 11 years.

In comparison with those of the preceding emperors, Khai Dinh’s tomb is much smaller in surface (117m x 48.5m) but it is very elaborate. It is the result of the interminglement of many architectural trends: European and Asian, as well as ancient and modern.

The overall construction of the tomb is an emerging rectangular structure with 127 steps, leaning against the mountain.- Entering the tomb area, one should climb a 37 steps gate with the biggest dragons in the country forming the side walls. In the courtyard, line two rows of left and right altar built according to traditional configuration of “double storeys with eight roofs”, but all the rafters are made of reinforced concrete.

Climbing 29 further steps, one is reaching the imperial audience court, in the centre of which stands the octagonal stele monument also made of reinforced concrete. On both sides of the courtyard, two rows of statues are facing towards the court center. In addition to these statues, similar to those of the other tombs, there are six more couples representing bodyguard soldiers. These statues are made of stone, a material very rare in Khai Dinh’s tomb. The courtyard is flanked on both sides by two high and imposing pillars.

You have to go up three more levels in order to reach the altar monument. The Khai Thanh Palace is the main room of the Thien Dinh palace, which contains many connecting rooms. The walls are densely decorated and inlaid with elaborate glass and porcelain designs. The floor is covered with enameled flowers bricks and the ceiling is painted with nine dragons, appearing in fine fleeting clouds.

The rear room of the Khai Thanh palace constitutes the main temple, which contains the statue of Khai Dinh, his grave and his altar. The tomb of Khai is one of the most surprising among the royal tombs of Hue.