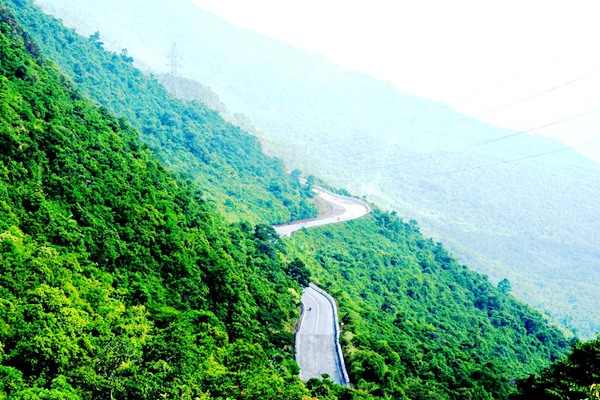 The Hải Vân Pass is an approximately 2 mile long mountain pass on National Road 1A in Vietnam. It traverses a spur of the larger Annamite Range that juts into the Viet Nam Sea, on the border of Đà Nẵng and Thừa Thiên-Huế Province, near Bach Ma National Park. Its name refers to the mists that rise from the sea, reducing visibility.

Hai Van Pass is situated along the Hai Van mountain side, on the border of Thua Thien Hue Province and Da Nang, and is one of the world’s most scenic coastal drives.

The most spectacular section spans 21 kilometers and comprises a series of hairpin turns, steep inclines and breathtaking vistas. Reaching an elevation of 496 meters, Hai Van Pass (meaning ‘Ocean Cloud Pass’) is often shrouded in mist that rises from the sea.

A mountain pass of historical strategic importance, it also serves as the boundary between the climates of northern and southern Vietnam, sheltering Da Nang from the ‘Chinese winds’ that blow in from the northwest. Sometimes the pass is covered by mist from the ocean giving the impression that you are travelling through the clouds as you drive. On a sunny day, Hai Van Pass offers you terrific panoramic views of Da Nang City, Son Tra Peninsula, Tien Sa Port and endless white-sand beaches.

A perfect harmony between natural wonder and the fruit of human effort, Hai Van Pass deserves its title “the most marvelous wonder” given by Emperor Tran Nhan Tong in 1470.